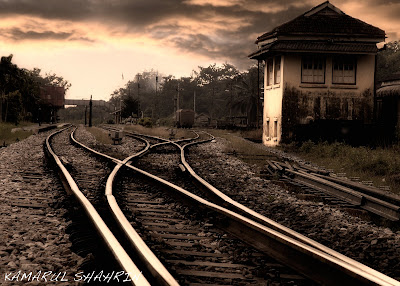 Nikon D100 c. 2004
I always have a fascination for railway stations. When I was boy, I used to cycle and watch the station in Taiping with the antiquated buildings, thinking that one day, I would capture it in my photography. It took 20 years later, before I set out to take the pictures. This is one of them and the setting was just right. Dense clouds had formed in the sky and the sun was setting down behind me on my right. The sunlight illuminated the tracks nicely, so that they appeared to rise up from the ground.

Posted by Kamarul Shahrin at 10:40 PM