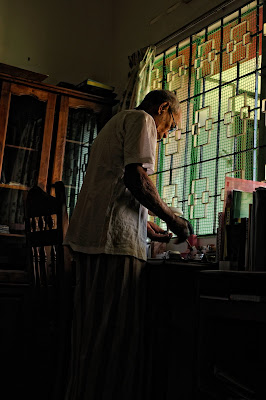 Nikon D3s ISO 200 f/4.5 c. June 2010
My father at his study table, as usual, engrossed in some analytical work. I had wanted to take shots of him much earlier but as always, he would become rigid, as if shot with a tranquilizer. He was unaware of my presence and the light from the window which gave just enough illumination on his face, provided the opportunity for me to take the shot.

Posted by Kamarul Shahrin at 5:05 AM

Email ThisBlogThis!Share to TwitterShare to FacebookShare to Pinterest
Labels: PORTRAITURES