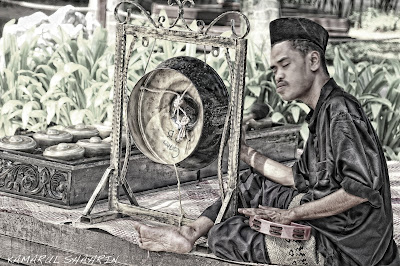 Nikon D200 c. 2007
Just the other day, I came across the caption in one of the photography magazines, "Have photographers gone too far?" which led to an article which discussed the prevailing tendency of photographers to impose dramatization through digital post-processing. There really is now a very thin line, if at all, which divides between art and photography. Photography is no longer a mere depiction of a scene; a mere documentation of events and drama. No doubt, photography has been an art form since a 100 or more years ago but superior software easily mediates the congruence of art and photography, for the sake of enhancing dramatization and capturing the awe from a captive audience. Anyone born with eyes which see, is inundated by thousands of images, from the television, the newspapers and magazines and real life. This is more so, with the global reach of the Internet, where one gets access to more images. For the photographer, photography has become institutionally competitive, even if taken as a hobby. The innate drive to be better, like the rest, with the best, has become customary in anybody with a camera, perhaps, due to the need to be involved and not being left behind in the current evolution of photography. I do wonder about the next phase of the evolution. First, there was the Black & White, then the colour and now the HDR. With the introduction of the 3-D television and the eventual manufacture of  Mac/PC screens which can render 3-D images, what I would expect is the growth of cameras which can render 3-D images in about two years time.

Posted by Kamarul Shahrin at 2:39 PM