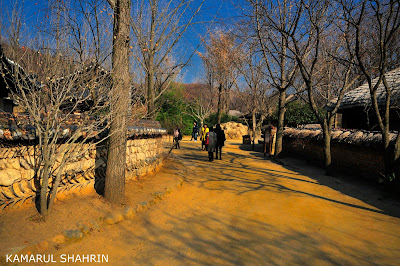 Nikon D300 f/10 ISO 400 c. November 2010
Here I was lugging around two cameras and getting involved with my photography and then this old lady tourist had to ask me to take pictures of her with her tiny Canon camera which I had difficulty holding much less, finding the push button. This she did many times, so much so that I grudgingly lost the focus on things. The weather was cold but I was already feeling the heat from inside. She came with another lady but preferred my assistance instead. I am not really obliging when I am in the thick of photography. "I come from California", she said. California is a big region with many cities but I stopped short of asking which city, for being polite. Perhaps too polite. With Chinese features, her English was not fluent and lacked the drawl of the American accent. Old tourists don't always tell the truth, as if the lie matters a lot. So, in the end, I stayed as much away from the party as possible, like in this picture.

Posted by Kamarul Shahrin at 8:23 AM