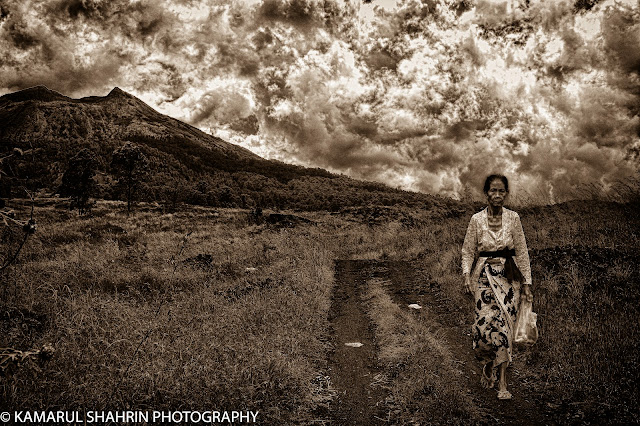 
Without this old woman, this photo would have been a single pass, from my point of view. Everyone is entitled to his or her own opinion. Thus, this person is integral to the picture, complimenting it. After all, it is just a barren landscape with just that volcano in the background and the textured clouds. I met a scuba diver the other day, Labu at Kuantan. I stayed at his house, along with my family. His passion was diving while I, on the other hand, almost drowned three times in the sea. Of course, in the Book of Destiny, my time has not yet come and I survived. I have the opposite of his passion. Labu described how beautiful it was to stay under the sea, in a different world, where there were no land-based worries. Labu encouraged me to learn scuba diving. But me and the sea, we are not that close. The sea has this thing for me whenever I am near. It becomes violent and menacing. Perhaps it is my imagination, a foolish one at that. But then again, I am entitled to my own opinion.
Posted by Kamarul Shahrin at 12:23 AM