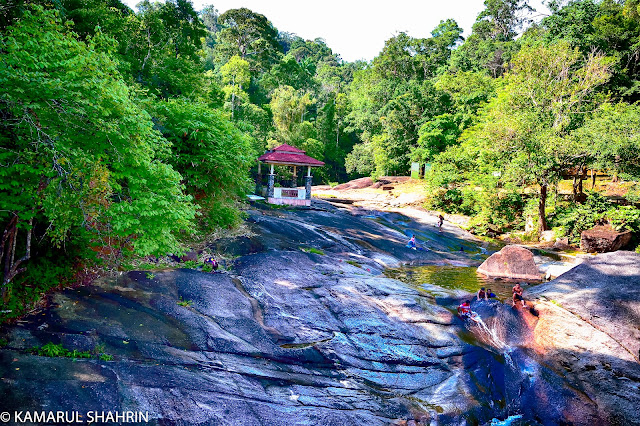 
That is a huge rock that is meant for a heavy stream of water. That's what it should be. But then, the water has been dammed upstream, mainly to siphon to a hotel (which has also obliged to manage this park for free).  So now, the water trickles, hardly sufficient to attract people to it. What is tourism in Malaysia? Malaysian tourism is managed by idiotic bureaucrats who believe that if hotels can be built at all touristic places by rendering the landscape into ugliness and utilise its resources, the tourists will come. Take for instance, the Taiping Lake Gardens. The municipality has been attempting to build a condominium at the Lakes but has met with resistance. Of course, there is personal money to be made. That is the personal motivation to put forward this destructive idea. Corruption cannot be ruled out.  Taiping used to be a town of many old colonial buildings which are nice to see. There's not much to be seen now. I used to post pictures of Taiping. Used to. Not anymore.
Posted by Kamarul Shahrin at 9:51 PM