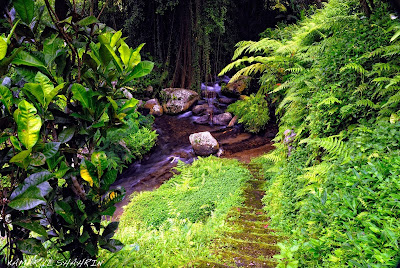 Nikon D200 c. 2007
I had wanted to go down to the river below to take some shots of the water but thought more than twice on doing it. The stony steps were covered with moss, which would make my descent treacherous and with one hand holding a heavy tripod, I could slip and fall and hit the rocks below. The crowd of tourists had left, my wife was already walking, leaving me alone. So, I did what I could and took this shot instead.

Posted by Kamarul Shahrin at 8:49 AM

Email ThisBlogThis!Share to TwitterShare to FacebookShare to Pinterest
Labels: LANDSCAPES