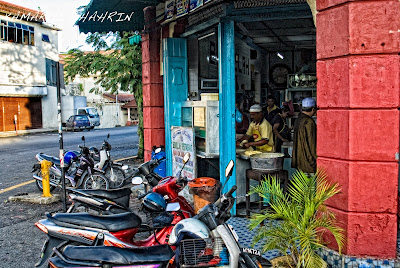 Nikon D200 c. October 2009
Without a doubt, this is the restaurant that still makes the best roti canai in the whole world. The roti canai is thick and crispy and has body but the main trick is in the gravy. The gravy was much better before in those days when I was a schoolboy who, with friends, would steal out from school and ride with our bicycles to have breakfast when everyone else had to content themselves with tasteless canteen food. The original recipe was not shared by the cook who left when he was not happy with the management. It took some years before the restaurant came out with the gravy after the cook left but it is not quite the same since.

Posted by Kamarul Shahrin at 12:36 AM