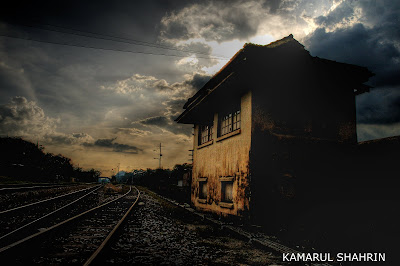 Nikon D100 f/11 ISO 200 c. June 2004
This picture is a tribute to a building that I had an affinity with for so many years. It was nothing much, but sitting near the aging railway tracks, the stationmaster's office insinuated a melancholic nostalgia for the days of yore, when things were much simpler. Constructed in 1881, it was to me, a milestone for the commencement of a slow journey. Without it, the railway tracks are nothing but strips of glistening metal without purpose and with no beginning. It is no longer there, recently demolished to oblivion for the sake of a so-called development which really doesn't bring external revenue to the country. It is a pity that there are always shallow imbeciles with no sense of appreciation for historical legacies running the government. They could have salvaged it through relocation. I suppose cockroaches will always be around when there is some element of dirt.

Posted by Kamarul Shahrin at 4:29 AM