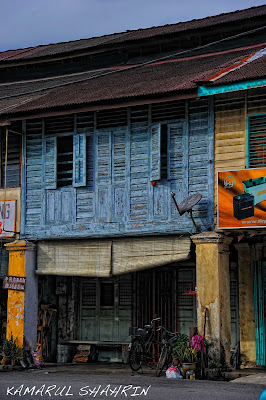 It is nothing in particular. I was just attracted to the worn-out blue paint on its wooden walls which reminded me of a house in Dungun, some forty years ago. After school in the afternoon, I would wander about with my bicycle, taking to the narrow pathways which led to the kampongs where wooden houses nestled under coconut trees. I had stopped to watch a villager husking a dry coconut with a metal rod which was anchored to the ground. On my right, there was a small house, that had been painted blue and the paint had dried and peeled over the years. . It was a cool afternoon and the villager did not pay any attention to the casual observer. I would have taken his photograph, standing there, under the coconut trees with their lightly swaying palms with the blue house in the background. But then, I was only 7 years old. I took the scene with my mind and it is still a photograph in my memory.

Posted by Kamarul Shahrin at 5:09 AM

Email ThisBlogThis!Share to TwitterShare to FacebookShare to Pinterest
Labels: BUILDINGSCAPES