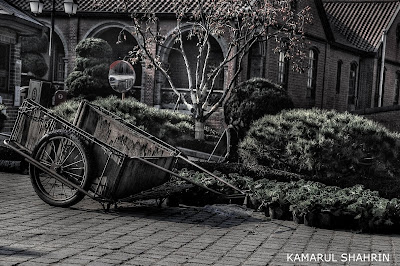 Nikon D3s f/5.6 ISO 200 c. November 2010
My images seem to have a certain quietude, as if unpeopled and suspended in time. This was intentional from the beginning. What drew my attention to the scenario was that the cart was unmanned; there simply was nobody there at the time although there was some element of work to be accomplished with the potted plants.

Posted by Kamarul Shahrin at 9:26 AM