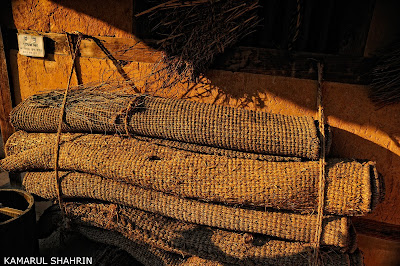 Nikon D3s f/9 ISO 200 c. November 2010
What is it that I am looking for? Perhaps, it is the quietude in objects, disregarding any aesthetics in the picture. Truly, I can only see the silence of the objects, tethered on the wall. As I see it, they were just straw mats of another era, of another past. Texture? Perhaps, but straw mats just the same; straw mats that used to be the bedding of people in the past. Not of this era of modernity, of cushioned mattresses, of apartments and television and mobile phones, of incessant noises of vehicles and chatter. No. Just straw mats hung on the wall, suggesting the simpicity of life in the past. Would I go there? No, except to photograph people doing simple things.

Posted by Kamarul Shahrin at 7:19 AM