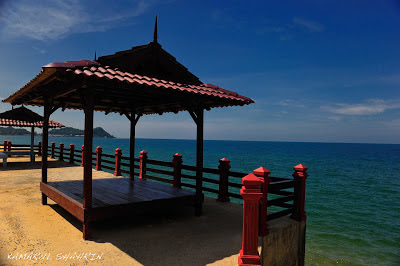 Gazebos are a common feature in the East Coast. In the old days when transportation meant walking or by bullock or horse cart, the gazebo served as a place of rest for wayfarers. It also served as a waiting place or a place to meet and talk and gossip. I used to live in a hospital compound in Dungun in the 60's and there was a tall gazebo there and I used to watch people sitting there, sometimes sleeping, sometimes eating and some resting.
Posted by Kamarul Shahrin at 8:40 AM